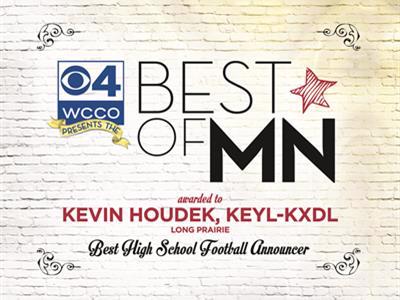 Kevin Houdek has been calling games for the Long Prairie-Grey Eagle Thunder for 30 years. His knowledge of the teams and the game sheds a bright light for those who can’t attend.

“People all over the country [listen in],” Houdek said. “A guy from Browerville that’s down in Arizona, I’ll get a text from him every once and a while, you know, saying, ‘Great game.'”

On this night, the Thunder are playing the Staples-Motley Cardinals. Both teams were 0-2 — and hungry for a win.

“It’s not life or death,” he said. “It’s to have a good time and stay professional, and remember you’re broadcasting for two teams, not just your home team.”

Sports teams and the media often clash, but Houdek has earned the respect of Activities Director Dan Zetah.

“Our coaches … really like him and respect him,” Zetah said. “He’s very savvy with the numbers, with stats. You ask him a stat about something, he’s got it right there.”

Listening to Houdek — as he delivers names and stats with computer-like precision — might be overwhelming to some, but it’s like poetry to someone who’s into the game.

“I think you can get some broadcasters … that can maybe get a little more opinionated or maybe get negative more, if you want to use that term. He doesn’t get that way at all,” Zetah said.

And it’s clear that Houdek loves his work.

“It’s so much fun,” he said. “As I’ve gotten older, I’ve appreciated it even more. Even at this level, I go to a game and every night I know somebody’s going to do something amazing.”

So if you’re ever driving through central Minnesota on game night, tune your radio to 1400 AM to hear the small-town guy who, in his own way, has hit the big time.

“A teenager’s going to pull off a big play, or they’re going to play their best game ever, and everybody’s having fun, and I’m having fun, too,” Houdek said.

He was recognized at the 11th Annual Minnesota Football Honors on April 29 at U.S. Bank Stadium.

MINNEAPOLIS, MN - April 16, 2018 - Longtime radio sports director and broadcaster Kevin Houdek will receive the Sid Hartman Media Award from the Minnesota Chapter of the National Football Foundation. He was recognized at the 11th Annual Minnesota Football Honors on April 29 at U.S. Bank Stadium.

Houdek is a Minnesota native who attended Danube High School before getting his associate’s degree in radio and television broadcasting at Brown Institute in Minneapolis. He is also a volunteer coach for youth baseball and wrestling and women’s slo-pitch softball, and is a 15 year veteran of the Long Prairie volunteer fire department.

The Sid Hartman Media Award is named after the Star Tribune’s most famous sports writer who is still covering local teams at age 98.